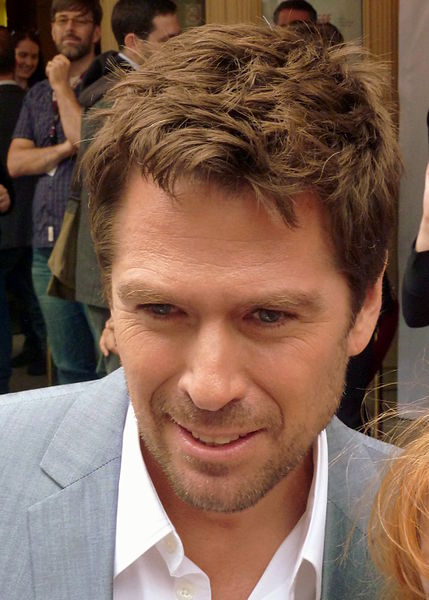 Alexis Denisof (born February 25, 1966) is an American actor who is primarily known for playing Wesley Wyndam-Pryce in the television series Buffy the Vampire Slayer and its spin-off Angel. He also had a recurring role on How I Met Your Mother on which his wife, Alyson Hannigan, starred.

Denisof was born in Salisbury, Maryland,[1] the son of Dr. Christiana Taylor and Gerald Denisof.[2][3] He is of Russian, French, and Irish ancestry.[4] He moved to Seattle, Washington, when he was three years old. He attended Highline College, where his mother was head of the drama department. After graduating from St. Paul's School in Concord, New Hampshire, he moved to London, England, at age 17, where he lived and worked for several years.[5] Whilst there, he studied at the London Academy of Music and Dramatic Art.
Read more...

Beginning his career in the film industry, Denisof was the fight director for a stage production of Hamlet, and in 1991 was the fight director for the BBC's The Other Side, Romeo and Juliet, and The Soul's Dark Night.[6] Alexis's first lead was alongside Christopher Lee in the feature film Murder Story where he played an investigative reporter. It was released in 1989. One of his first known works in television was on the arcade version of the video for "Got My Mind Set On You" by George Harrison. In 1995 he landed a small part in the 1995 movie First Knight, appearing as one of Arthur's round table knights in multiple scenes with Sean Connery and Richard Gere.[1] Following those roles, Denisof worked with Sean Bean in three episodes of Sharpe as Lord John Rossendale in 1997.[2]

His best-known character, Wesley Wyndam-Pryce, was first introduced in 1999 to season 3 of Buffy the Vampire Slayer as Buffy's replacement Watcher. Originally, Wyndam-Pryce was supposed to be killed off in the season 3 finale but, due to Whedon's surprise at how well he fit into the series, Denisof was given the choice about his character's fate and chose for him to live. As a result, he later showed up in season one, episode 10 of Angel, and was an official main cast member from episode 11 (effectively replacing Doyle), appearing in 100 out of the 110 episodes of the series. The character was heavily endeared to fans due to the transformation from goofy and lovable, to dark, depressed and moody as a result of events that occur over the course of the series.

The end of the series in 2004 saw a bit of a lag in Denisof's career. Save for appearing in three episodes of the hit series How I Met Your Mother, as the goofy philandering Sandy Rivers, Denisof would not work as much as he used to for the next several years. During this time he appeared in several stage productions, including Rope at Chichester Festival Theatre's Minerva Theatre with Anthony Head, who played Wesley's predecessor Rupert Giles on Buffy. Most likely due to his time playing an English character on Angel, Denisof was among 200 actors considered for the role of James Bond in Casino Royale, but lost out to Daniel Craig. Later, in 2008, he appeared in Season 2 of Private Practice as a man named Daniel, who has two pregnant wives giving birth on the same day.[7] In 2009, he appeared in four episodes of Joss Whedon's Dollhouse as Senator Daniel Perrin.[8]

Denisof at the 2012 Toronto Film Festival

In 2011, Denisof reprised his recurring role in How I Met Your Mother, as Sandy Rivers; he appeared in 10 episodes, his last appearance was in ep. "Gary Blauman". In a season 1 commentary, creators Craig Thomas and Carter Bays speculated that Denisof was initially reluctant to take the role back in 2006 because he feared it was just charity work on account of his wife, Hannigan, playing a main character on the show. They went on to state that he was not aware, until they actually told him, that they were huge fans of his work dating back to his time on Angel.[9][10]

Since 2011, Denisof has been relatively active. He played a voice role in the animated DC movie Justice League: Doom. He was featured in the majority of episodes in the AOL webseries, Little Women, Big Cars. Denisof was then cast as a lead in Bryan Singer's new webseries H+: The Digital Series. He then reunited with Joss Whedon for two different film projects. The first was a minor role in the summer blockbuster The Avengers, as The Other, a servant to the character Thanos, and a cohort of Loki. The second was the lead male role in a modern version of Shakespeare's Much Ado About Nothing, which premiered at the Toronto Film Festival, to positive reviews from critics. The film was released worldwide in June 2013.[11]

In August 2013 he was cast in the third season of NBC's Grimm as a recurring character named Viktor Albert Wilhelm George Beckendorf.[12] In 2014, Denisof reprised his role as the Other in Guardians of the Galaxy. In the same year he began starring in the MTV television series Finding Carter as David Wilson.[13] As of 2018, Denisof stars in I Love Bekka and Lucy as Glenn, and was nominated for a Primetime Emmy Award for Outstanding Lead Actor in a Drama Series, his first such nomination.[14]

According to the DVD release of Angel's Season Five, three weeks before the filming of the season premiere Denisof was stricken with Bell's palsy, from which he later recovered. Due to the paralysis of the left side of his face, scenes were structured as to not show its effects.[7]

Denisof married past co-star Alyson Hannigan, who played Willow Rosenberg in Buffy the Vampire Slayer, on October 11, 2003. The couple live in Encino, Los Angeles.[15] They have two daughters, Satyana Marie Denisof, born on March 24, 2009 (which is also Alyson Hannigan's birthday),[16] and Keeva Jane Denisof, born May 23, 2012.[17]

Report a problem
Write to Alexis Denisof at FanPal • 2021