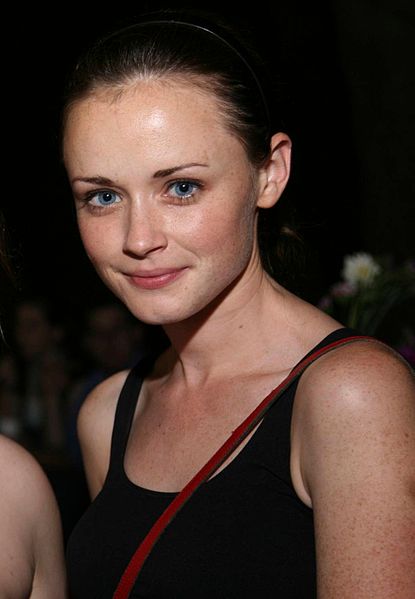 Kimberly Alexis Bledel[1] (/bləˈdɛl/ blə-DEL; born September 16, 1981) is an American actress and model. She is best known for her role as Rory Gilmore on the television series Gilmore Girls (2000-2007), for which she received nominations for Satellite, Teen Choice and Young Artist Awards. In 2016, Bledel reprised her role on the Netflix reunion miniseries Gilmore Girls: A Year in the Life.

Bledel made her feature film debut as Winnie Foster in Tuck Everlasting (2002), and has since appeared in Sin City (2005), Post Grad (2009), and as Lena Kaligaris in The Sisterhood of the Traveling Pants film series. Since 2017, she has appeared in the Hulu drama series The Handmaid's Tale. For her work on the series, she received the Primetime Emmy Award for Outstanding Guest Actress in a Drama Series and an additional nomination in the Supporting Actress category.

Bledel was born in Houston, Texas, to Nanette (née Dozier), who worked as a gift processor and flight attendant, and Martín Bledel.[2][3] She has a younger brother, Eric.[1] Her father was born and raised in Argentina.[4][5] Her paternal grandfather, Enrique Einar Bledel Huus, was born in Buenos Aires, Argentina, and was of Danish and distant German descent; Enrique was Vice President of Coca-Cola Latin America and the Coca-Cola Inter-American Corporation. Bledel's paternal grandmother, Jean (née Campbell), was originally from New York, and had Scottish and English ancestry.[6][7][8] Bledel's mother, Nanette, was born in Phoenix, Arizona, and moved to Guadalajara, Mexico, at the age of eight; Nanette was raised there, and in Mexico City.[9][10][11] Of her parents' upbringing in Latin America, Bledel has stated "It's the only culture my mom knows from life, and my father as well, and they made the decision to raise their children within the context they had been raised in".[3][9] Bledel grew up in a Spanish-speaking household, and did not learn English until she began school; she considers herself a Latina.[3][12]

Bledel attended Catholic St. Agnes Academy in Houston, as well as Baptist and Lutheran schools.[13] Her mother encouraged her to try community theater to overcome her shyness.[14] As a child, Bledel appeared in local productions of Our Town and The Wizard of Oz.[15] She was scouted at a local shopping mall and given work as a fashion model.[citation needed] She went to Page Parkes Center for Modeling and Acting and attended New York University's Tisch School of the Arts for one year.[16][not in citation given]

Bledel made her television debut in 2000; opposite Lauren Graham in The WB comedy-drama Gilmore Girls, which ran for seven seasons from October 5, 2000 to May 15, 2007.[17] She played Rory Gilmore, the daughter of Lorelai Gilmore (Graham), a single mother. Initially, Rory was a high school student at an exclusive private academy, living with her mother in a small town in Connecticut, but later moved on to college at Yale University, where she, among other things, worked as the editor of the Yale Daily News.[18]

Bledel made her feature film debut opposite Jonathan Jackson in the fantasy romantic drama Tuck Everlasting (2002), based on Natalie Babbitt's novel of the same name (1975). Before her work in that film, Bledel was an uncredited extra in the 1998 comedy-drama Rushmore.[19] In 2005, she co-starred in the drama The Sisterhood of the Traveling Pants, opposite Amber Tamblyn, America Ferrera, and Blake Lively, and based on Ann Brashares' novel of the same name. She played Lena Kaligaris, an aspiring artist on a journey with her three best friends, linked over the summer by a pair of "magical" jeans.

In 2005, Bledel co-starred in the anthology neo-noir crime thriller Sin City where she played Becky, a prostitute. "She's a very professional prostitute. She carries a gun and she kicks ass," said Bledel of her character.[20] In 2006, Bledel co-starred opposite Jay Baruchel in the romantic comedy I'm Reed Fish as the fiancée of Baruchel's title character. After the end of Gilmore Girls, she reprised her role of Lena Kaligaris in The Sisterhood of the Traveling Pants 2, released in August 2008. The following year, Bledel starred in the comedy Post Grad, which was released on August 21, 2009.

Bledel co-starred opposite Scott Porter and Bryan Greenberg in the romantic comedy The Good Guy, which premiered at Tribeca Film Festival April 26, 2009. The film centered around Porter's character Tommy, a Wall Street investment broker whose life falls apart when he helps out Greenberg's character Daniel, a new broker. Bledel played Beth, Tommy's girlfriend. In April 2009, Bledel guest-starred in the NBC medical drama ER in the two-hour series finale titled "And in the End..." as Dr. Julia Wise, a new intern to the hospital.[21] In May 2009, Bledel signed a contract with the modeling division of IMG.[16]

Bledel co-starred opposite James McAvoy and Robin Wright in the historical drama The Conspirator directed by Robert Redford. She played the girlfriend of McAvoy's character Frederick Aiken, the lawyer who defended Mary Surratt, the first woman to be hanged by the federal government of the United States, played by Wright. The film premiered at the Toronto International Film Festival and was released in the United States on April 15, 2011.[22] Also in 2010, Bledel starred as the title role in the Canadian drama The Kate Logan Affair. The film was presented at Montreal's Festival du Nouveau Cinéma 2010.[23][24]

Bledel performed in the theatre production Regrets by the Manhattan Theatre Club, staged at the New York City Center.[25] It was confirmed in early-March 2013 that Bledel would co-star opposite Jason Ritter in the Fox pilot Friends & Family, an adaptation of the British sitcom Gavin & Stacey as Stacey with Ritter as Gavin.[26] The pilot was picked up for a series and was retitled Us & Them.[27] However, Fox eventually decided not to air the series.[28] 2015 saw Bledel starring with Katherine Heigl as the fiancée to Heigl's character in the film Jenny's Wedding.

On January 29, 2016, Netflix announced a revival of Gilmore Girls with a series of four 90-minute films set around the four seasons, and Bledel's participation was confirmed.[29] In 2017, she appeared as Ofglen in The Handmaid's Tale for Hulu; subsequently her role was expanded to a regular role for the second season.[30] Her critically acclaimed turn in the role earned Bledel her first Emmy Award nomination and win in the 2017 Creative Arts ceremony in the category of Outstanding Guest Actress in a Drama Series.[31]

Report a problem
Write to Alexis Bledel at FanPal • 2022