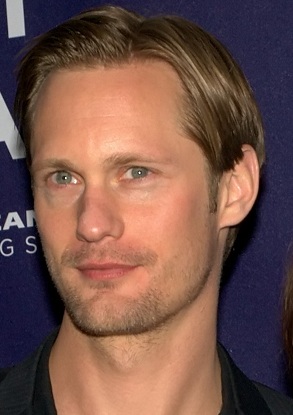 Alexander Johan Hjalmar Skarsgård (;[1] born 25 August 1976) is a Swedish actor. He is best known for his roles as vampire Eric Northman on the HBO series True Blood, Meekus in Zoolander, the title character in The Legend of Tarzan, Brad Colbert in the HBO miniseries Generation Kill, and Perry Wright in the HBO miniseries Big Little Lies, for which he won a Primetime Emmy Award for Outstanding Supporting Actor in a Limited Series or Movie, a Screen Actors Guild Award for Outstanding Performance by a Male Actor in a Miniseries or Television Movie, and a Golden Globe Award for Best Supporting Actor - Series, Miniseries, or Television Film.

Alexander Skarsgård was born in Stockholm, Sweden. He is the eldest son of actor Stellan Skarsgård and his first wife, My Skarsgård, a physician.[2] He has five younger siblings: Gustaf, Sam, Bill, Eija and Valter, and two half-brothers from his father's second wife, Megan Everett.[3][4] Gustaf, Bill, and Valter are also actors.[3]

A friend of his father, who was a director, gave Skarsgård his first film role when he was seven years old. He played Kalle Nubb in Åke och hans värld (Åke and His World). In 1989, the lead role in the Swedish television production Hunden som log (The Dog That Smiled) made him famous in Sweden at the age of thirteen. Uncomfortable with being recognized, he quit acting for the next seven years.[5][6][7]

At age 19, he applied to do his national service. He served in the Swedish military for 18 months, in a unit that dealt with anti-sabotage and anti-terrorism in the Stockholm archipelago.[8] After completing his service in 1996 he left Sweden and attended Leeds Beckett University in England for six months. He enrolled to study English but admits he did not study much and "had a blast" instead.[3][6]

After seven years away from acting, he started to consider it again. In 1997, he enrolled in a theater course at Marymount Manhattan College and moved to New York City. He returned to Stockholm after six months, but the time he spent studying theater showed him that he wanted to act.[3][9]

Upon his return to Sweden, Skarsgård began picking up acting jobs, working in film, television and theatrical productions.[3] While on vacation in the United States, he auditioned for and landed the role of Meekus in the 2001 film Zoolander.[10] In 2003, his work in Hundtricket-the Movie (The Dog Trick) earned him an Guldbagge Award nomination for Best Supporting Actor. He was named the Sexiest Man in Sweden five times.[5]

He moved to Los Angeles in 2004 but continued to work in Sweden.[11] His break came when he was cast as Sergeant Brad "Iceman" Colbert in the HBO miniseries Generation Kill. An adaptation of journalist Evan Wright's book of the same name, Generation Kill follows the 1st Reconnaissance Battalion of the United States Marine Corps during the early part of the Iraq War. The role of Brad Colbert was the closest to a "lead" in Generation Kill, and director Susanna White and executive producer David Simon at first disagreed about casting Skarsgård. White wanted to cast him but Simon was not convinced he could pull off the American accent. After four auditions in three cities, Skarsgård learned the role was his just 36 hours before he had to board a plane for Namibia where the project was filming. The cast and crew filmed for seven months in the desert, shooting six days a week. Skarsgård worked with a dialect coach to master the American accent.[3][5][12]

Skarsgård at the 2010 Tribeca Film Festival

Just before leaving to shoot Generation Kill, Skarsgård heard about True Blood, a new series HBO was developing based on the Southern Vampire Mysteries series of novels by Charlaine Harris. At first he was unsure about playing a vampire, but when he learned that Alan Ball, creator of the HBO series Six Feet Under and Academy Award winning screenwriter of American Beauty, was behind the project, he sent in an audition tape. The audition was for the role of Bill Compton, which eventually went to Stephen Moyer. Skarsgård was later cast as Eric Northman, a 1000-year-old, Viking vampire sheriff, local bar owner and potential love interest of heroine Sookie Stackhouse in October 2007.[5][13] True Blood launched its seventh and final season in June 2014.

In 2009, Skarsgård appeared in the music video for pop singer Lady Gaga's "Paparazzi".[13] He was the voice of Stefan in the 2009 animated film Metropia, directed by Tarik Saleh.[6] In 2010, Skarsgård portrayed Terje, a gay Norwegian trekking to the North Pole, in the British mockumentary Beyond the Pole.[14]

Suit maker Hickey Freeman chose Skarsgård to model a new look it debuted in 2010. Annie Leibovitz photographed the ad campaign which appeared in The Wall Street Journal Magazine, GQ and Details.[15][16] He covered the September 2010 issue of Rolling Stone with his True Blood co-stars, Anna Paquin and Stephen Moyer.[17]

Skarsgård appeared in two 2011 films. Melancholia,[18] an apocalyptic movie directed by Lars von Trier and starring Kirsten Dunst, Charlotte Gainsbourg and Kiefer Sutherland, premiered at the 2011 Cannes Film Festival.[19][20] Skarsgård appeared in Straw Dogs, a remake of the 1971 film of the same name, as Charlie Venner. The remake's director, Rod Lurie, transferred the small town setting from Cornwall to Mississippi, and described Venner as "an ex-football star gone to seed". The film co-starred James Marsden and Kate Bosworth[8] and was released 16 September 2011.

In 2012, Skarsgård appeared alongside Taylor Kitsch and Rihanna in Peter Berg's Battleship, an adaptation of the Hasbro game.[21] He also starred with Julianne Moore and Steve Coogan in Scott McGehee and David Siegel's film, What Maisie Knew, an adaptation of the Henry James novel of the same name.[22] He was also part of the ensemble cast in Henry Alex Rubin's thriller, Disconnect, playing opposite Paula Patton.[23]

Skarsgård starred alongside Brit Marling and Ellen Page in Zal Batmanglij's 2013 film, The East.[24] Skarsgård starred in the 2016 film The Legend of Tarzan, portraying the title character, opposite Margot Robbie as Jane. To prepare for this role, Skarsgård worked out for 7 months with trainer Magnus Lygdbäck [25] In 2017 he co-starred in HBO's Big Little Lies. For his role as an abusive husband, Skarsgård won the Primetime Emmy Award for Outstanding Supporting Actor in a Limited Series or Movie.[26]

Skarsgård is a fan of Swedish football and supports Hammarby IF, a club based in Stockholm, his birth city.[27]

In October 2010, he participated in "Bajen Aid" by donating several items he had autographed and auctioned to raise money for the Hammarby football club.[28]

In July 2011, Skarsgård received an honorary degree from Leeds Beckett University where he was formerly a student.[29]

Skarsgård was the Ambassador for the American team for a Walking With The Wounded fundraising event for wounded soldiers. He trekked to the South Pole against Team UK (Prince Harry, Ambassador) and Team Canada/Australia (The Wire actor Dominic West, Ambassador). A few days into the trek, it was decided that the competition part of the race would be canceled due to hazardous terrain and weather conditions, so the teams combined forces and continued. Alongside Prince Harry, West and several wounded soldiers, he successfully made it to the South Pole on 13 December 2013.[30]

Skarsgård self-identifies as a feminist.[31]