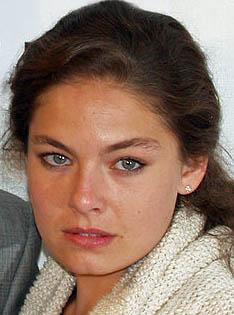 Davalos, an only child, was born Alexa Davalos Dunas in France, to American parents, actress Elyssa Davalos and photographer Jeff Dunas. Her maternal grandfather was actor Richard Davalos. Davalos spent most of her childhood in France and Italy, before settling in New York.[1] She has stated "I tend to curse in French more often than I do in English."[2] She is of Spanish and Finnish descent on her mother's side.[3] Her family name would be spelt originally "Dávalos" in Spanish, with an accent on the first "a". Her father's family is Jewish (her paternal ancestors lived in Vilnius in Lithuania).[4] She was raised "without much religion", though she attended Hebrew school for a time.[5]

Davalos struck out on her own at seventeen and headed to New York City. She supported herself by modeling for photographers like Peter Lindbergh. "I had a mission," she recalls. "I wanted to be out in the world, doing my own thing. Working in a theatre, I discovered that I really wanted to act."[2] Her passion soon grew towards acting, and she attended the Off Broadway Flea Theater in New York.[2]

In 2002, Davalos co-starred with Charlie Hofheimer in the short film The Ghost of F. Scott Fitzgerald, which screened at the 2002 Toronto International Film Festival.[6] In September 2003, she was seen opposite Antonio Banderas in the HBO film And Starring Pancho Villa as Himself. Davalos made her feature film debut in 2004 starring in The Chronicles of Riddick as Jack / Kyra.

Davalos also appeared as the mutant Gwen Raiden in three episodes of the TV show Angel and in 2005 co-starred in the Fox show Reunion. In 2007, she was featured in the romantic drama Feast of Love, which starred Greg Kinnear and Morgan Freeman.[7] She also played Sally in The Mist (directed by Frank Darabont), co-starring Thomas Jane, Laurie Holden and Marcia Gay Harden.

In 2008, Davalos co-starred as the love interest of Daniel Craig in the war film Defiance, directed by Edward Zwick. She played Andromeda in the remake of Clash of the Titans, alongside Sam Worthington, Ralph Fiennes and Liam Neeson.[8] She did not return for the 2012 sequel, Wrath of the Titans, due to a scheduling conflict.[9]

In 2013, she reunited again with Frank Darabont playing the female lead on the television series Mob City.[10]

Davalos is a close friend of actress Amanda Righetti, and was Righetti's bridesmaid at her wedding.[11] Davalos considers herself to be a "dork" and loves to travel and read.[12] She guards her private life stating, "I think it's a choice. I think it's a conscious choice, and what you allow to affect you and what you don't."