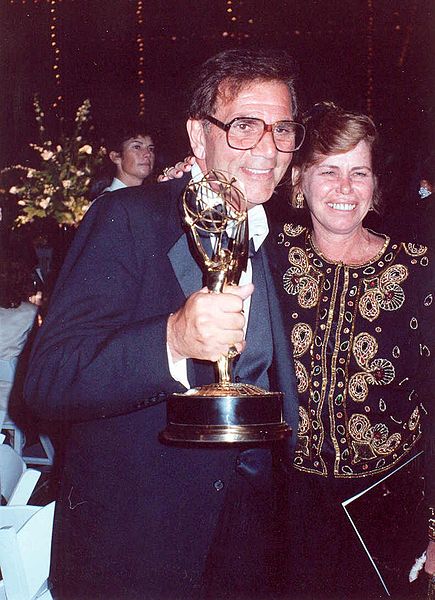 Alessandro Federico Petricone, Jr. (February 29, 1936 - July 18, 2015), known professionally as Alex Rocco, was an American actor. Often cast as a villain, he is best known for his portrayal of Moe Greene in The Godfather and his Primetime Emmy Award for Supporting Actor in a Comedy for The Famous Teddy Z. He did a significant amount of voiceover work later in his career, and was known for his gravelly voice.[1] He was also a member of the Bahá'í Faith.

According to organized crime turncoat Vincent Teresa, Alex was a hanger-on with the Winter Hill Gang of the Boston area. An unwanted advance toward Petricone's then girlfriend on Labor Day, 1961, touched off the Boston Irish Gang War of the 1960s. Georgie McLaughlin, who made the advance, was beaten by Winter Hill Gang members.[7] Howie Carr, a Boston-area journalist and radio personality who has written extensively about the Boston underworld, has written that the young Petricone (whose nickname was "Bobo") was arrested in Charlestown in November 1961 along with Winter Hill boss Buddy McLean for questioning following the death of Bernie McLaughlin of the Charlestown Mob, the first murder of the war.[8] Petricone was released without charge and moved to California in 1962. (When he returned to the Boston area in 1972 to play a bank robber in the film The Friends of Eddie Coyle, Petricone — now using the name "Alex Rocco" — set up a meeting between Robert Mitchum and local Irish-American gangsters to help Mitchum research his part as Eddie Coyle, a low-level Irish-American criminal. Rocco introduced Mitchum to Howie Winter, leader of the Winter Hill Gang.[9] Another Winter Hill Gang member who met with Mitchum was Johnny Martorano, who had murdered Billy O'Brien, a low-level gangster.[10])

He first worked as a bartender in Santa Monica, California and took acting lessons from actor Leonard Nimoy, a fellow Boston native. Nimoy was not impressed with Rocco's heavy Boston accent and told him to take speech lessons. Rocco followed through with Nimoy's instructions and after ridding himself of the accent came back to study under Nimoy and character actor and teacher Jeff Corey.[citation needed]

Rocco played the part of Moe Greene, a Las Vegas casino owner, in the film The Godfather. Greene's character represented the top Jewish mobster in Las Vegas; although he sought an Italian role, director Francis Ford Coppola remarked "I got my Jew!" on seeing Rocco.[1] Other notable films in which Rocco appeared include The Wedding Planner, as Salvatore and (uncredited] Smokin' Aces. In the film That Thing You Do!, Rocco played Sol Siler, the founder of Playtone Records.[citation needed]

In the fall of 1975, Rocco starred in the role of Pete Karras, a widowed father, writer, and photographer, in a 12-week CBS drama series Three for the Road, with Vincent Van Patten as his older son, John Karras, and Leif Garrett as his younger son, Endy Karras. After the death of their wife and mother, the Karrases sell their house, buy a recreational vehicle, and roam throughout the United States.[11]

He played Charlie Polniaczek, Jo's father on The Facts of Life. In 1989, he played Gus Keller in the Corey Feldman and Corey Haim movie Dream a Little Dream. From 1989–90, Rocco was a regular on the television comedy series The Famous Teddy Z as "Al Floss", a Hollywood talent agent. He received an Emmy Award as Best Supporting Actor in a Comedy Series for this role in 1990. In 1997, he appeared (along with Rodney Dangerfield) in the annual Thanksgiving episode of the ABC sitcom Home Improvement.[citation needed]

Rocco also had a recurring part in the long running animated series The Simpsons as the head of Itchy and Scratchy Studios, Roger Meyers, Jr. In DVD commentaries, Rocco expressed true gratitude to The Simpsons' staff for allowing him his first voice-over role. He did further voice work on two early episodes of another Fox sitcom, Family Guy. Rocco did a voiceover on the 1998 Disney/Pixar film A Bug's Life, deeming it his "greatest prize in life" as he was paid $1 million to record eight lines.[1]

In 2008, he starred in Audi's Super Bowl commercial for the Audi R8 supercar. The commercial was inspired by one of the films Rocco was in: The Godfather. He played a rich man who finds the front fascia of his luxury car in his bed, a nod to the scene from the original movie in which Jack Woltz, a rich movie producer, finds the head of his prized racehorse in his bed.[12] He was also featured on the Starz cable channel's crime-drama series, Magic City.[13]

After moving to Los Angeles, Rocco became a member of the Bahá'í Faith,[14] and he appeared in a number of productions related to the religion over the years.[15][16][17] He also thanked Bahá'u'lláh in his Emmy Award acceptance speech.[18]

Report a problem
Biography of Alex Rocco at FanPal • 2021