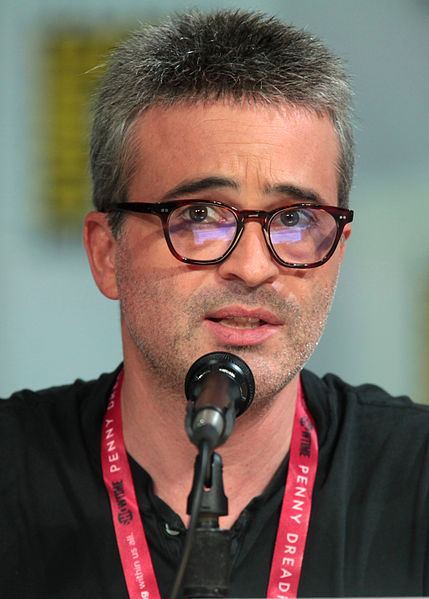 Alex Kurtzman (born September 7, 1973) is an American film and television writer, producer, and director. He is best known for co-writing the scripts to Transformers, Star Trek, Star Trek Into Darkness, and The Amazing Spider-Man 2 with his writing and producing partner Roberto Orci, and directing and co-writing The Mummy.

Kurtzman was born and raised to a secular Jewish family[1][2][3] in Los Angeles, California,[4] where he met his high school friend and longtime collaborator Roberto Orci. He attended Wesleyan University.[5]
Read more...

Kurtzman first teamed with Orci on television on the syndicated series Hercules: The Legendary Journeys, for the television unit of Pacific Renaissance Pictures, then operating out of Universal International. After they produced several storylines to cope with the absence of lead actor Kevin Sorbo following a stroke that Sorbo had suffered during the fourth season, Kurtzman and Orci, both aged 24, were placed in charge of the show. They moved into films after they were asked to rewrite Michael Bay's The Island. The film earned $162 million at the worldwide box office, on a budget of $126 million, which was enough of a success that they were brought to write Bay's Transformers, which earned $710 million. Though The Island, Transformers and Transformers: Revenge of the Fallen were not particularly well received by critics, the three films earned a combined $1.7 billion. They co-created the Fox TV series Fringe in 2008 along with J. J. Abrams. After the pilot, Kurtzman served as consulting producer on the show for the remainder of its run.[6] They then co-wrote the 2009 film Star trek.

In 2011, Forbes magazine described Orci and Kurtzman as "Hollywood's Secret Weapons" as, over the course of the previous six years, their films had grossed a combined total of over $3 billion at the box office. The partnership also wrote People Like Us, originally known as Welcome to People, which was Kurtzman's directorial debut.[6]

He frequently collaborates with a tightly knit group of film professionals which include J.J. Abrams, Damon Lindelof, Adam Horowitz, Roberto Orci, Edward Kitsis, Andre Nemec, Josh Appelbaum, Jeff Pinkner, and Bryan Burk.[2] In April 2014, both Orci and Kurtzman confirmed to Variety that they would no longer work together on film projects; they added that they would still work together—but only on television projects.[7]

Report a problem
Write to Alex Kurtzman at FanPal • 2020