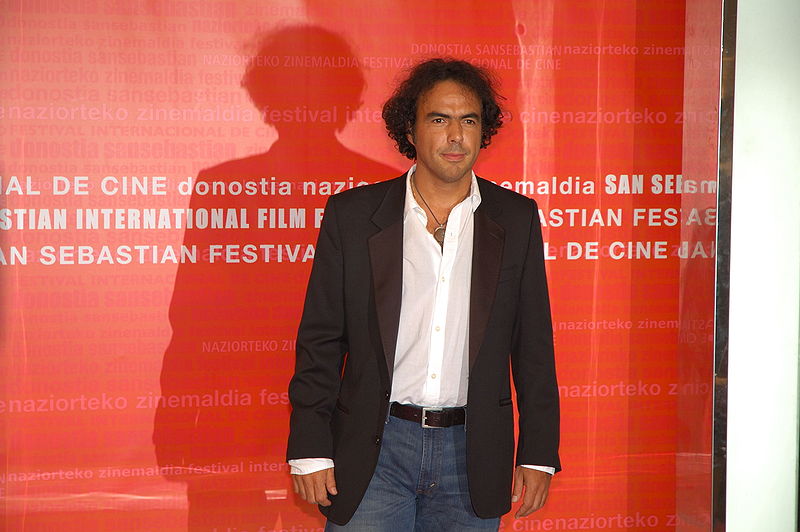 Alejandro González Iñárritu (/ɪˈnjɑːrɪtuː/; ; credited since 2014 as Alejandro G. Iñárritu; born August 15, 1963) is a Mexican film director, producer, and screenwriter. His feature films have garnered critical acclaim and numerous accolades, including five Academy Awards. In 2006, he became the first Mexican director to be nominated for the Academy Award for Best Director and the Directors Guild of America Award for Outstanding Directing for Babel. In 2015, he won three Academy Awards for Best Picture, Best Director, and Best Original Screenplay for Birdman or (The Unexpected Virtue of Ignorance) (2014). The following year, he won a second Academy Award for Best Director for The Revenant (2015), making him the third director to win back to back Academy Awards, and the first since 1950. Iñárritu was awarded a Special Achievement Academy Award for his virtual reality project Flesh and Sand in 2017, the first time it had been awarded since 1995.[1]

Iñárritu was born in Mexico City, the youngest of seven children to Luz María Iñárritu and Héctor González Gama.[2] Crossing the Atlantic Ocean on a cargo ship at the ages of 16 and 18, Iñárritu worked his way across Europe and Africa.[3][4] He has noted that these early travels as a young man have had a great influence on him as a filmmaker.[4] The settings of his films have often been in the places he visited during this period. After his travels, Iñárritu returned to Mexico City and majored in communications at Universidad Iberoamericana, one of the most prestigious private universities in Mexico.[5]
Read more...

Iñárritu began his career in 1984 as a radio host at the Mexican radio station WFM, the country's most popular rock music station, where he "pieced together playlists into a loose narrative arc".[4][5] During his time in radio he also wrote and broadcast small audio stories and storytelling promos, that would become a reference for generations of audio producers, radio Dj's and broadcasters as to how to use radio as a more creative media outlet. He later became the youngest producer for Televisa, the largest mass media company in Latin America.[5] From 1987 to 1989, he composed music for six Mexican feature films. During this time, Iñárritu became acquainted with Mexican writer Guillermo Arriaga, beginning their screenwriting collaborations.[5] Iñárritu has stated that he believes music has had a bigger influence on him as an artist than film itself.[4]

In the early 1990s, Iñárritu created Z films, a production company, with Raul Olvera in Mexico.[6] Under Z Films, he started writing, producing and directing short films and advertisements.[5] Making the final transition into TV and film directing, he studied under well-known theater director Ludwik Margules, as well as Judith Weston in Los Angeles.[7][8] In 1995, Iñárritu wrote and directed his first TV pilot for Z Films, called Detrás del dinero, or Behind the Money, starring Miguel Bosé.[6] Z Films went on to be one of the biggest and strongest film production companies in Mexico, launching seven young directors in the feature film arena.[citation needed]

After the success of Amores Perros, Iñárritu and Arriaga revisited the intersected-stories structure of Amores perros in Iñárritu's second feature film, 21 Grams (2003).[5] The film starred Benicio del Toro, Naomi Watts and Sean Penn. It was selected to compete for the Golden Lion at the Venice Film Festival, where Penn received the Volpi Cup for Best Actor.[11][12] At the 76th Academy Awards, Del Toro and Watts received nominations for their performances.[13]

Babel received seven nominations at the 79th Academy Awards, including Best Picture and Best Director.[11] Gustavo Santaolalla, the film's composer, won the Academy Award for Best Original Score.[20] The film won the Golden Globe Award for Best Motion Picture - Drama in 2007.[21] Iñárritu became the first Mexican director to be nominated for the Academy Award for Best Directing and the Directors Guild of America Award for Outstanding Directing.[22][23] After this third feature film collaboration with writing partner Arriaga, Iñárritu and he professionally parted ways, following Iñárritu's barring of Arriaga from the set during filming. Arriaga told the Los Angeles Times in 2009, "It had to come to an end, but I still respect ."[24]

In 2010, Iñárritu directed and produced Biutiful, starring Javier Bardem, written by Iñárritu, Armando Bó Jr., and Nicolás Giacobone.[25] The film premiered at the Cannes Film Festival in May 2010.[26] Bardem went on to win Best Actor (shared with Elio Germano for La nostra vita) at Cannes.[27] Biutiful is Iñárritu's first film in his native Spanish since his debut feature Amores perros. The film was nominated at the 2011 Golden Globes for Best Foreign Language Film, and at the BAFTA Awards for Best Film Not in the English Language and Best Actor.[28][29] For the second time in his career, Iñárritu's film was nominated for Best Foreign Language Film at the Academy Awards; Javier Bardem's performance was also nominated for the Academy Award for Best Actor.[30]

2013-present: Birdman and The Revenant

In 2014, Iñárritu directed, co-produced and co-wrote his first comedy, Birdman or (The Unexpected Virtue of Ignorance), starring Michael Keaton, Edward Norton, Emma Stone, Naomi Watts, Zach Galifianakis, and Andrea Riseborough. Birdman is about a washed-up actor famed for playing an iconic superhero who tries to revive his career by doing a play based on the Raymond Carver short story "What We Talk About When We Talk About Love." The film and Iñárritu won the Golden Globe Award for Best Screenplay, and the Academy Award for Best Picture, Best Directing, and Best Original Screenplay.[31][32]

Iñárritu's next film as a director was The Revenant, which he and Mark L. Smith adapted from Michael Punke's novel of the same name.[33][34] The film starred Leonardo DiCaprio, Tom Hardy, Domhnall Gleeson, and Will Poulter.[35] It is a "gritty" 19th-century period drama-thriller about fur trapper Hugh Glass, a real person who joined the Rocky Mountain Fur Company on a "journey into the wild" and was robbed and abandoned after being mauled by a grizzly bear.[34] The film considers the nature and stresses on relationships under the duress of the wilderness, and issues of revenge and pardon via Glass's pursuit of the man who was responsible for his hardship.[33][36] The Revenant took nine months to shoot.[37] The film received "generally favorable" reviews,[38] and was nominated for 12 Academy Awards, including Best Picture and Best Director, winning Best Director, Best Cinematography and Best Actor.[39][40] It was also nominated for four Golden Globe Awards, winning three, including Best Motion Picture - Drama and Best Director,[41] and received nine Critics' Choice Movie Awards nominations, including Best Picture and Best Director.[42]

The One Percent is an upcoming American television drama series created and written by Iñárritu, Alexander Dinelaris Jr., Nicolás Giacobone and Armando Bó. The quartet, who also collaborated on Birdman, will serve as executive producers. Iñárritu will direct the first two episodes and set the visual style of the show. A 10-episode first season was ordered by the American premium cable network Starz,[43] though Starz later dropped the series.[44]

From 2001 to 2011, Iñárritu directed several short films. In 2001, he directed an 11-minute film segment for 11'09"01 September 11 - which is composed of several short films that explore the effects of the 9/11 terrorist attacks from different points of view around the world.[5] In 2007, he made ANNA, part of French anthology film Chacun son cinéma, which screened at the 2007 Cannes Film Festival. Chacun son cinéma, a collection of 34 short films by 34 renowned film directors representing 25 countries, was produced for the 60th anniversary of the film festival.[45][better source needed] In 2012, Iñárritu made the experimental short film Naran Ja: One Act Orange Dance, inspired by L.A Dance Project's premiere performance, featuring excerpts from the new choreography Benjamin Millepied crafted for Moving Parts. The story takes place in a secluded, dusty space and centers around LADP dancer Julia Eichten.[46]

In 2002, Iñárritu directed "Powder Keg", an episode for the BMW short film series The Hire, starring Clive Owen as the driver and Stellan Skarsgård as a war photographer. It won the Cannes Gold Lion Advertising Award.[47] In 2010, Iñárritu directed "Write the Future", a football-themed commercial for Nike ahead of the 2010 FIFA World Cup, which went on to win the Grand Prix at the Cannes Lions Advertising Festival.[48] In 2012, he directed Procter & Gamble's "Best Job" commercial spot for the 2012 Olympic Ceremonies. It won the Best Primetime Commercial Emmy at Creative Arts Emmy Awards[49] and the DGA Award for Outstanding Directorial Achievement in Commercials.[50]

On October 4, 2012, Facebook released an Iñárritu-directed brand film titled The Things That Connect Us to celebrate the social network reaching one billion users.[51]

Iñárritu is married to Maria Eladia Hagerman, an editor and graphic designer. They have a daughter, Maria Eladia, and a son, Eliseo.[52][53]

In 2006, Iñárritu was honored at the Gotham Awards' World Cinema Tribute, alongside fellow Mexican filmmakers Alfonso Cuarón and Guillermo del Toro.[63] In 2015, Iñárritu received the Sundance Institute's Vanguard Leadership Award for the "originality and independent spirit" of his films.[19] He was also honored by the Los Angeles County Museum of Art at its Art + Film Gala.[64]

As of 2018[update], each of Iñárritu's feature films, with the exception of Amores perros, showcases at least one Academy Award nominated performance.

Report a problem
Write to Alejandro Gonzalez Inarritu at FanPal • 2020