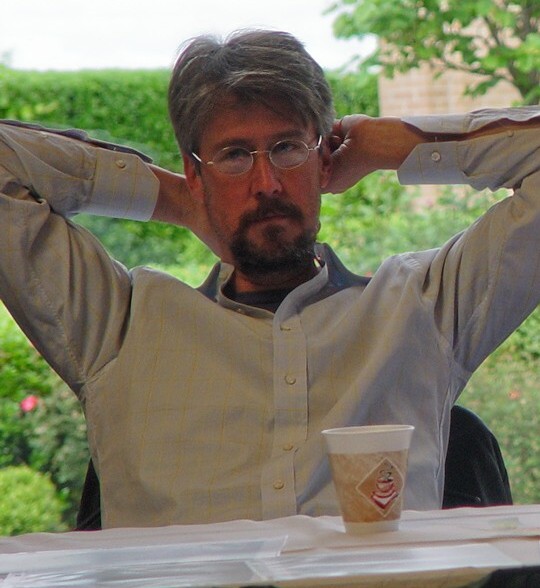 Ruck was born in Cleveland, Ohio, to a schoolteacher mother and a father who worked for a pharmaceutical company.[1] He attended Parma Senior High School located in Parma, Ohio, and graduated from the University of Illinois with a B.F.A. in drama in 1979.[2] He recalled:

After school, I went up to Chicago, because I didn't really know anybody in New York or Los Angeles, and I knew people who were doing plays in Chicago. So I went up there, and I knocked around a little bit. And I guess about a year after I was out of school, I got my first job.

Ruck made his Broadway debut in 1985 in Neil Simon's Biloxi Blues with Matthew Broderick. Early on, Ruck was a prominent stage actor at many theaters around the country, including Wisdom Bridge Theatre in Chicago. In his initial foray into film acting, Ruck appeared in Class and Hard Knocks as well as some television films.[2]

Ruck's first film role was in the 1983 drama film Bad Boys, where he played Carl Brennan, Sean Penn's friend in the film. The same year he played Roger Jackson in Class, with his role as Cameron Frye, Ferris Bueller's hypochondriac best friend in John Hughes' Ferris Bueller's Day Off coming three years later. One of his other film roles was in the 1987 film Three for the Road.

Ruck later appeared in the 1989 comedy film Three Fugitives. Following that, he played a significant role as Hendry William French in Young Guns II, the 1990 sequel to Young Guns. He also played Captain John Harriman of the USS Enterprise-B in the 1994 film, Star Trek Generations, a role which he has reprised along with Generations co-star Walter Koenig and other Trek alumni in the fan film Of Gods and Men.[3] Alan also played an annoying tourist named Doug Stephens on an ill-fated bus in the blockbuster Speed. Another supporting role was of the eccentric storm chaser Robert 'Rabbit' Nurick in the 1996 disaster film Twister.[4]

From 1990 to 1991, Ruck starred as Chicago ad man Charlie Davis, in the ABC series Going Places. ABC canceled the series after one season (22 episodes). He appeared in the series Daddy's Girls in 1994, which was canceled after three episodes. From 1996 to 2002, Alan played Stuart Bondek in the sitcom Spin City alongside Michael J. Fox and later, Charlie Sheen. In 2005, he played Leo Bloom in the Broadway version of Mel Brooks' The Producers, a role also played by his Ferris Bueller co-star, Matthew Broderick.

Ruck was then cast in the pilot of the Tim Minear-created Fox Network series Drive, but did not appear in the actual series. He also starred in one episode of the Comedy Central sitcom Stella as Richard, a man looking for work. He later starred in the season two Scrubs episode "My Lucky Day" as a patient, and played reporter Steve Jacobson on the ESPN miniseries The Bronx Is Burning.

In 1998, Ruck guest starred in the fifth episode of the HBO miniseries From the Earth to the Moon as the NASA engineer Tom Dolan.

In 2006, Ruck guest starred in a single episode of Stargate Atlantis called "The Real World" and, in 2007, as unscrupulous property developer Albert Bunford in an episode of Medium.

In the 2007 comedy Kickin' It Old Skool, he appears as Dr. Frye, a possible connection to Cameron Frye; he even mentions still trying to pay off an old Ferrari, a reference to Cameron totaling his dad's Ferrari in Ferris Bueller's Day Off.

Ruck played the part of a ghost of a family man in the 2008 film Ghost Town starring Ricky Gervais. In 2009, he had a minor role as a married man named Frank in an episode of Cougar Town. In his role, he has problems with his marriage due to a crush he had long ago on Jules, played by Courteney Cox.

Ruck also has a small role in the 2008 M. Night Shyamalan film, The Happening. He recently played the role of Dean Bowman in the college fraternity drama, Greek. He appeared in a guest role as a manic geologist in an episode of Eureka. Additionally, he plays Mr. Cooverman in the film I Love You, Beth Cooper. In 2009, Ruck filmed the medical drama Extraordinary Measures[5][6] in Portland, Oregon, with star Harrison Ford.

Ruck then appeared as a bank robber in a season three episode of the USA Network series Psych, and as a lawyer in season five of the ABC series Boston Legal. He recently guest starred as Martin, a magazine reporter, on an episode of Ruby & the Rockits entitled "We Are Family?".

In 2010, Ruck was cast as a lead character in the NBC mystery-drama, Persons Unknown. He also guest-starred on the television show Fringe as a scientist turned criminal, in the NCIS: Los Angeles season two episode "Borderline", and guest-starred as ex-money laundering accountant turned dentist, on an episode of Justified entitled "Long in the Tooth". He also appeared in the Grey's Anatomy season five episode "In The Midnight Hour".

In 2012, Ruck was cast in the ABC Family series Bunheads as the husband to Sutton Foster's character, Michelle. In 2013, he appeared in NCIS, guest-starring in the season 11 episode, "Gut Check".

In autumn 2016, Ruck began a 10-episode run as Henry Rance, the husband (who has suffered mild brain damage in a vaguely-explained accident) of Angela Rance (Geena Davis), better known as the all-grown-up Regan MacNeil, the tortured girl (played by Linda Blair) who is possessed by a demon in the 1973 hit film The Exorcist. This Fox TV adaptation is "inspired by" the 1971 William Peter Blatty best-selling novel. In this update, the demon that tortured Regan/Angela as a girl did not die as it did at the end of the feature film, and it now inhabits one of Angela and Henry's daughters. Once again, they must turn to exorcism-practicing priests (Alfonso Herrera, Ben Daniels) for help. Regan/Angela's mother, Chris MacNeil (played by recurring guest star Sharon Gless and Ellen Burstyn in the feature film), is welcomed by the rest of the family but utterly scorned by her own daughter.

Ruck married Claudia Stefany in 1984, and had two children with her—a daughter, Emma, and a son, Sam. They divorced in 2005. He married actress Mireille Enos on January 4, 2008. They met in 2005 while co-starring in the Broadway revival of Absurd Person Singular. Mireille gave birth to their daughter Vesper in 2010. On February 12, 2014, the couple announced their second child was on the way and their son Larkin was born in July 2014.[7]

Report a problem
Write to Alan Ruck at FanPal • 2021