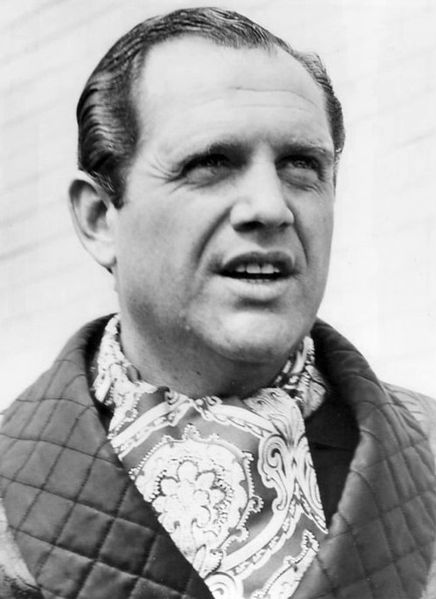 Alan King (born Irwin Alan Kniberg; December 26, 1927 - May 9, 2004) was an American actor and comedian known for his biting wit and often angry humorous rants. King became well known as a Jewish comedian and satirist. He was also a serious actor who appeared in a number of movies and television shows. King wrote several books, produced films, and appeared in plays. In later years, he helped many philanthropic causes.

Alan King had one sister, Anita Kniberg. King was born in New York City, the son of Russian-Jewish immigrants Minnie (née Solomon) and Bernard Kniberg, a handbag cutter.[1][2] He spent his first years on the Lower East Side of Manhattan. Later, King's family moved to Brooklyn. King used humor to survive in the tough neighborhoods. As a child, King performed impersonations on street corners for pennies.

When he was fourteen, King performed "Brother, Can You Spare a Dime?" on the radio program Major Bowes Amateur Hour. He lost first prize, but was invited to join a nationwide tour. At fifteen, King dropped out of high school to perform comedy at the Hotel Gradus in the Catskill Mountains. After one joke that made fun of the hotel's owner, King was fired; however, he spent the remainder of that summer and the one that followed as M.C. at Forman's New Prospect Hotel in Mountaindale, New York. He later worked in Canada in a burlesque house while also fighting as a professional boxer. He won twenty straight fights before losing. Nursing a broken nose, King decided to quit boxing and focus on his comedy career. King began working as a doorman at the popular nightclub Leon and Eddie's while performing comedy under the last name of the boxer who beat him, "King".

With Dick Cavett and Johnny Carson in 1968

King began his comedy career with one-liner routines and other material concerning mothers-in-law and Jews. His style of comedy changed when he saw Danny Thomas performing in the early 1950s. King realized that Thomas was talking to his audience, not at them, and was getting a better response. King changed his own style from one-liners to a more conversational style that used everyday life for humor. His comedy inspired other comedians such as Joan Rivers, Jerry Seinfeld, Larry David, Billy Crystal, Robert Klein, and Bill Cosby.

King married Jeanette Sprung in 1947. They had three children, Andrew, Robert, and Elainie Ray. His wife persuaded him to move to Forest Hills, Queens for their children, and later, to Great Neck, Long Island, where he lived for the rest of his life.[3] There, he developed comedy revolving around life in suburbia. With America moving to suburbs, King's humor took off.

He began opening for celebrities including Judy Garland, Patti Page, Nat King Cole, Billy Eckstine, Lena Horne and Tony Martin. When Martin was cast in the movie Hit the Deck, he suggested King for a part, which resulted in his first movie role. King played small roles in movies in the 1950s, but disliked playing stereotypical roles that he described as "always the sergeant from Brooklyn named Kowalski".[4]

King eventually expanded his range and made a name for himself in a wide variety of films. He often portrayed gangsters, as in Casino (1995) and Night and the City (1992), both starring Robert De Niro, as well as I, the Jury (1982) and Cat's Eye (1985). He frequently worked for director Sidney Lumet, beginning with Bye Bye Braverman (1968) and The Anderson Tapes (1971). Lumet later cast him in a starring role in Just Tell Me What You Want (1980), a provocative comedy about a ruthless business mogul and his TV-producer mistress (Ali MacGraw). He also played himself in an uncredited cameo in Lumet's film Prince of the City (1981).

He had another major role in Memories of Me (1988) as the so-called "king of the Hollywood extras," portraying Billy Crystal's terminally ill father. King played the role of corrupt union official Andy Stone in Martin Scorsese's 1995 movie Casino.

Like many other Jewish comics, King worked the Catskill circuit known as the Borscht Belt. His career took off after appearances on The Ed Sullivan Show, The Perry Como Show and The Garry Moore Show. Living just outside New York City, King was frequently available when Sullivan needed an act to fill in for a last-minute cancellation. King also became a regular guest host for The Tonight Show Starring Johnny Carson, and he hosted the Oscars in 1972 and was the MC for President John F. Kennedy's inauguration in 1961. King was the long-standing host of the New York Friar's Club celebrity roasts and also served as the club's historian. He headlined two unsold television pilots on CBS, both titled The Alan King Show. The first aired on September 8, 1961; the second aired on July 12, 1986.[5]

King was the first recipient (1988) of the award for American Jewish humor from the National Foundation for Jewish Culture. The award was ultimately renamed in his honor.

Throughout his life, King was deeply involved in charity work. He founded the Alan King Medical Center in Jerusalem, raised funds for the Nassau Center for Emotionally Disturbed Children (near his home in Kings Point, New York), and established a chair in dramatic arts at Brandeis University. He also created the Laugh Well program, which sends comedians to hospitals to perform for patients. In the 1970s, King turned his passion for tennis into a pro tournament at Caesars Palace Las Vegas called the Alan King Tennis Classic, which was carried on national TV by the TVS Television Network. He also started the Toyota Comedy Festival. He was survived by his wife—appropriately a theme of one of his most famous routines—Jeanette Sprung, whom he married in 1947, and their three children.

King, who smoked cigars heavily (a fact that came up in his routines from time to time), died at Memorial Sloan-Kettering Cancer Center in Manhattan on May 9, 2004, from lung cancer. He was buried in Mount Hebron Cemetery in Flushing, Queens. The movie Christmas with the Kranks was dedicated to his memory at the end of the credits before the 1492 Pictures logo.[1] He is also referenced in the end credits of Rush Hour 3.

Report a problem
Biography of Alan King at FanPal • 2023