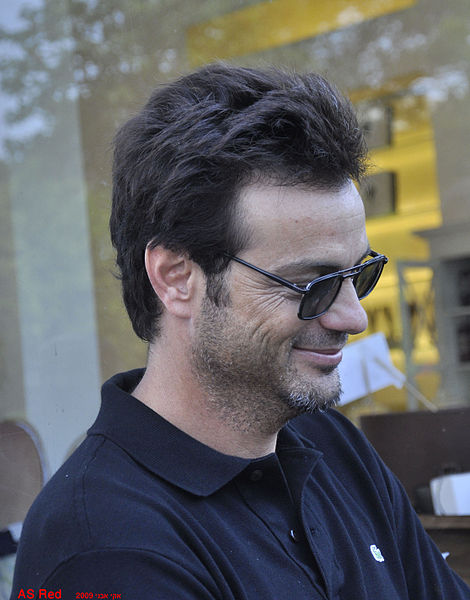 Yitzhak Avni (Hebrew: יצחק "אקי" אבני‬; born 27 April 1967), best known as Aki Avni, is an Israeli actor, entertainer and television host. He appeared in the movie Free Zone with Natalie Portman. He also played the character Mohsen in the second season of the television series 24.

Yitzhak ("Aki") Avni was born and raised in Rehovot. While in school he began performing in various shows in his home town. When growing up he had a mediocre modeling career, and afterward served in the Israeli Air Force. Between 1987-1988, he performed his military service and was released with the rank of Sergeant.[1]He was married to Israeli model and actress Sendi Bar. They resided for several years in Los Angeles with their child. They separated after returning to Israel in 2008.[citation needed] Aki married Nicole Miller in 2016. They have 2 children.

Aki Avni in The Fifth Heaven

Following his military service, he joined an entertainment troupe at a hotel in Eilat, appeared in children's shows and commercials, and trained at Yoram Levinstein's acting studio. His breakthrough arrived when he was elected to be a co-host on Arutz 1's "Tossess" youth television program.[citation needed]

In 1992 he co-starred in the musical Lelackek T'toot (Licking the Strawberry), alongside Aviv Geffen in Naarei Hachof (The Beach Boys) and played a young homosexual man in the film Chesed Mufla (Amazing Grace). In 1993 he appeared in the film Zarrim Balaila (Strangers in the Night).[citation needed]

In 1994, with the launching of Channel 2, Avni began hosting the dating show Stutz (Fling) and the musical Pachot o Yoter (More or Less, Israeli version of The Price Is Right). In 1995 he hosted the Pre-Eurovision contest with Michaela Bercu, participated in the film Sachkanim (Actors), in the musical Grease, and starred in the play West Side Story alongside Noa Tishby. He has hosted the Miss Israel Pageant and other beauty pageants.