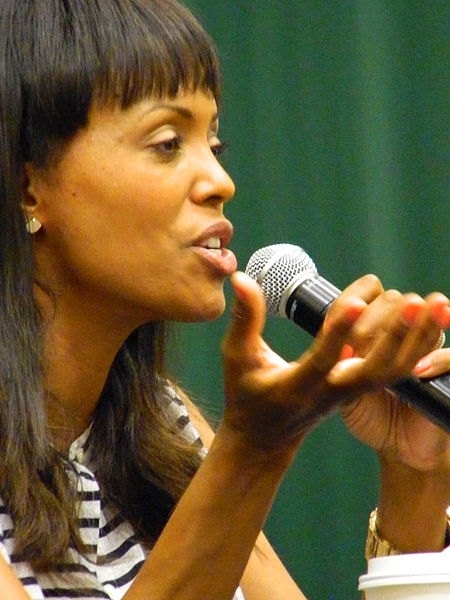 Aisha N. Tyler (born September 18, 1970)[1] is an American actress and comedian. She is known for portraying Andrea Marino in the first season of Ghost Whisperer, voicing Lana Kane in Archer, portraying Dr. Tara Lewis in Criminal Minds and portraying Mother Nature in the Santa Clause film series, as well as recurring roles in CSI: Crime Scene Investigation, Talk Soup and Friends. She is a former co-host of CBS's The Talk,[2] and the host of Whose Line Is It Anyway? Tyler also hosted Ubisoft's E3 press conferences from 2012 to 2016, and has made various video game appearances including Halo: Reach and Ubisoft's Watch Dogs where her voice and likeness are featured.

Tyler was born in San Francisco, California, the daughter of Robin Gregory, a teacher, and James Tyler, a photographer.[1] The family spent one year in Ethiopia and later spent time living in an ashram in the US.

She pursued an early interest in comedy at McAteer High School in San Francisco, which had a special program called School of the Arts, now named Ruth Asawa San Francisco School of the Arts.[3] Tyler attended high school with Sam Rockwell, and Margaret Cho. She had a crush on Rockwell, and followed him into acting class one day, leading to her interest in improv and sketch.[4]

Tyler graduated from Dartmouth College in 1992.[5][6] She was a member of The Tabard, a co-ed fraternity.[7] At Dartmouth, she co-founded and sang in the Dartmouth Rockapellas, an all-female a cappella group devoted to spreading social awareness through song.[7]

After briefly working for a San Francisco advertising firm, she toured the country pursuing a comedy career before moving to Los Angeles in 1996.[citation needed]

Tyler signing at a Barnes & Noble bookstore in New York

Tyler's career in television took off in 2001 with jobs as the host of Talk Soup and the reality-dating series The Fifth Wheel, although Talk Soup was canceled the following year and Tyler left The Fifth Wheel in 2002 to pursue other interests. Tyler has devoted a significant amount of her time to independent projects, including a role in the play Moose Mating, for which she received an NAACP Image Award. She also wrote, directed, and starred in the independent short film The Whipper. Moving into acting, Tyler featured in Friends as Dr. Charlie Wheeler, Joey's and then Ross' girlfriend, in the ninth and tenth seasons. She followed this up with guest spots on CSI: Miami and Nip/Tuck, as well as balancing season-long recurring roles on both CSI: Crime Scene Investigation and 24 during the 2004-2005 television season. She also filmed her own sitcom pilot for CBS, which was not picked up. She has guest-starred on MADtv.

Following her regular role on the CBS series Ghost Whisperer during its first season, Tyler appeared in several films, including The Santa Clause 2, The Santa Clause 3: The Escape Clause, .45, and the comedy Balls of Fury. In 2007, she filmed the thriller Death Sentence and the crime drama Black Water Transit. She also continues to appear on television, with appearances on Boston Legal, Reno 911!, The Boondocks, and as a guest film critic on several episodes of At the Movies with Ebert & Roeper, filling in for the absent Roger Ebert while he recuperated from surgery.

Tyler has moved into print media as a regular contributor to Glamour, Jane, and Entertainment Weekly magazines. Her first book, Swerve: A Guide to the Sweet Life for Postmodern Girls, was released in January 2004.[8] Tyler plays on the World Poker Tour in the Hollywood Home games for the Futures Without Violence charity. She also made a guest appearance on Kanye West's single "Slow Jamz", which featured Twista and Jamie Foxx. Philanthropy and charity work are very important to Tyler, and she regularly does volunteer work for the American Red Cross, The Trust for Public Land, Planned Parenthood Federation of America, and the International Rescue Committee.

Tyler appeared in a nude pictorial, along with other celebrities, in the May 2006 issue of Allure.[9] The annual Nude Issue raises money to combat skin cancer.

In May 2009, it was announced that ABC had given Tyler her own talk show pilot, The Aisha Tyler Show.[10] In early May 2010, she presented the "Welcome to the Beta" video for Halo: Reach. She also voiced a minor character in the game.[11]

In 2009, she began her starring role voicing Lana Kane in the FX series Archer, which premiered on January 14, 2010[12] and has run for a total of 9 seasons as of 2018.[13] In August 2010, Tyler began appearing in a recurring guest spot on The Stephanie Miller Show. The segment is named "Tuesdays With Tyler".[14] Tyler appears either in-studio or via phone when she is not otherwise committed to one of her acting roles. While Hal Sparks was out of the country, Tyler filled in as the third member of the Stephanie Miller Sexy Liberal Comedy Tour on three shows in August 2011.[15]

Also in 2009, Tyler performed her stand-up comedy routine, live at the Fillmore Theatre.[16]

Starting on July 26, 2011, Tyler started her own weekly podcast, Girl on Guy, where she interviews her favorite celebrity friends and discusses topics guys love. Girl on Guy is available on her website for download using iTunes, mp3, and RSS. The show launched as the No. 4 comedy podcast on iTunes and currently is the No. 2 comedy podcast, and the No. 7 overall podcast on iTunes. The first weekly installment of Girl on Guy featured guest H. Jon Benjamin, the second featured the host of Current TV's former show InfoMania Brett Erlich on August 1, 2011, and the third featured Archer creator Adam Reed on August 9, 2011.

In October 2011, it was announced that Tyler would join the cast of The Talk as a permanent co-host, replacing Holly Robinson Peete. Her first full week as a co-host was October 24 through October 28, 2011.[2] Tyler is known for being expressive and outspoken on The Talk, especially about African American culture and stereotypes, LGBT rights, and women's rights. Tyler presented Ubisoft's press conference at E3 2012 in June, which received some backlash from fans who didn't believe Tyler was a gamer.[17] This caused Tyler to respond with a poem about how she has been playing video games "since you were a twinge in the left side of your daddy's underoos".[18] She returned to host the publisher's press conference the following year. Tyler's second book, Self-Inflicted Wounds: Heartwarming Tales of Epic Humiliation, debuted in July 2013, later becoming a New York Times bestseller; it was inspired by questions asked of guests on Girl on Guy.

In March 2013, Tyler was confirmed to be the new host of the American version of Whose Line Is It Anyway?.[19] She also appears briefly as herself in the video game Watch Dogs and is featured in the music video for the "Weird Al" Yankovic song "Tacky". Tyler was also the original voice for the character Daisy Fitzroy in the 2013 video game BioShock Infinite, but her recordings were not used[20] and the role went to Kimberly Brooks. She was nominated for Personality of 2014 in Golden Joystick Award 2014.

In June 2015, it was announced that Tyler landed a recurring role on the eleventh season of Criminal Minds as Dr. Tara Lewis. Although she served as a temporary replacement for Jennifer Love Hewitt, who was on maternity leave,[21] her status was elevated to main cast member in season 12.

On the June 15, 2017, episode of The Talk, Tyler announced that she would be leaving the show at the end of the seventh season due to her busy schedule with three other television shows and directing films. She said she would return as a guest host and to promote her various projects.[26][27]

Tyler is a vocal advocate for the rights of the LGBTQ community.[33]