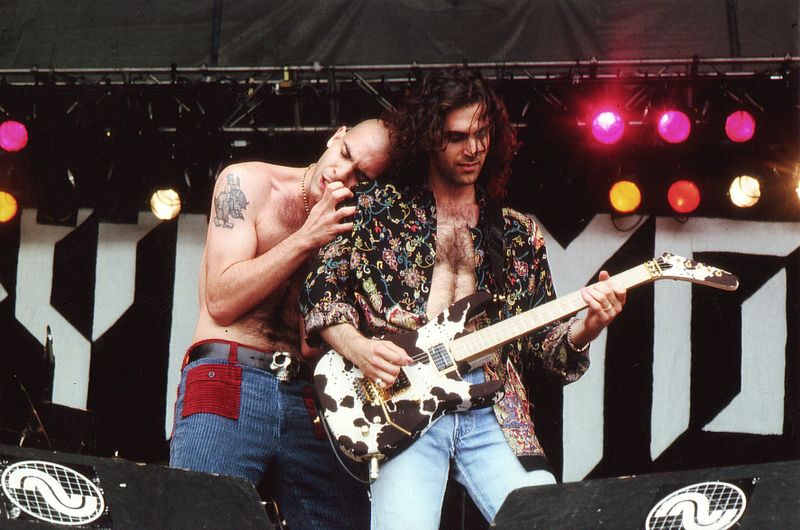 Ahmet Emuukha Rodan Zappa (born May 15, 1974) is an American musician and writer, and - as son of musician Frank Zappa - executor of the Zappa Family Trust.

Ahmet Zappa was born in the Hollywood Hills area of Los Angeles, the third of four children born to musician Frank Zappa and businesswoman Gail Zappa (née Sloatman).[1] His father was of Italian (Sicilian), Greek, Arab, and French descent, and his mother was of French, Irish, and mostly Danish ancestry.[2][3] He is named after music executive Ahmet Ertegün, whom his father greatly admired.[4]

This is contradicted by Neil Slaven in Electric Don Quixote: The Definitive Story Of Frank Zappa, where he notes:

"His first name was that of an imaginary person we always had hanging around back when we had no one on our payroll," Gail told Victoria Balfour. "We'd snap our fingers and say, 'Ahmet? Dishes. Coffee, please.' He was also named after a giant pterodactyl that would have ravaged the world if the Japanese film director Ishiro Honda hadn't destroyed it in 1957." [5]

His older brother and sister are Dweezil Zappa and Moon Zappa, and his younger sister is Diva Zappa.

Ahmet Zappa has released several albums with his brother Dweezil, and wrote the song "Frogs with Dirty Little Lips" with his father.

He has appeared in several feature films and television programs. In the late 1990s, he appeared on Channel 4 UK's The Adam and Joe Show, in a regular segment called "Vinyl Justice", in which hosts Adam Buxton and Joe Cornish, dressed as policemen, examined his vinyl collection for "criminal records". In 2000, he appeared in the film Ready to Rumble. With his brother Dweezil, he performed a cover of Britney Spears' song "...Baby One More Time" for the film's soundtrack. Other appearances include hosting the TV shows Robotica and But Can They Sing?.

In July 2006, Zappa saw the release of his debut novel, entitled The Monstrous Memoirs of a Mighty McFearless, aimed at younger readers. The rights to a movie were purchased by Bruckheimer Films and Disney.[6] The movie is in production with screenwriter Tim Firth assisting, no release date has been announced.[7]

On October 19, 2006, The Jim Henson Company announced it had hired Zappa to write a treatment for a feature film version of the hit 1980s television show Fraggle Rock.[8] He is also writing a sequel to The Monstrous Memoirs of a Mighty McFearless,[citation needed] which had also been optioned to adapt to a screenplay. Zappa proposed to Disney's studio head Bob Iger that the company form a graphic novel-to-film division; the result was "Disney's Kingdom Comics."[9] Zappa was also given a first-look deal at Walt Disney Studios for motion picture productions. His company is called Monsterfoot Productions. His first film, The Odd Life of Timothy Green, was released in 2012 by Walt Disney Pictures, and starred Jennifer Garner and Joel Edgerton.

Following the death of Zappa's mother, Gail, in October 2015, it was revealed that Ahmet and his sister Diva were given control of the Zappa Family Trust with shares of 30% each, while his siblings Moon and Dweezil were given smaller shares of 20% each.[10] As beneficiaries only, Moon and Dweezil will not see any money from the trust until it is profitable—in 2016, it was "millions of dollars in debt"—and must seek permission from Ahmet, the trustee, to make money off of their father's music or merchandise bearing his name.[11] The uneven divide of the trust has resulted in several conflicts between Zappa's children, including a feud between Dweezil and Ahmet over Dweezil's use of his father's music in live performances.

Under Ahmet's direction, the trust proposed a trademark on the name Zappa, which would prevent Dweezil from using the name for commercial purposes without authorization. Since 2006, Dweezil toured with an act called Zappa Plays Zappa, playing his father's music. The trust sought to collect a fee from Dweezil for continued use of the name, as well as proceeds from merchandise sold at Zappa Plays Zappa concerts.[10] In response to the trust's action, Dweezil renamed his performance series "50 Years of Frank: Dweezil Zappa Plays Whatever the F@%k He Wants — the Cease and Desist Tour.[11]

Zappa married actress Selma Blair on January 24, 2004, at Carrie Fisher's mansion in Beverly Hills, California. Blair filed for divorce at the Los Angeles Superior Court on June 21, 2006, citing irreconcilable differences. In a statement to People, a spokesman for the couple said, "Selma and Ahmet have decided to divorce but love each other very much and will continue to be close friends".[12]

Zappa is now married to Shana Muldoon — designer, writer, and creator of Disney Star Darlings and the sister of actor Patrick Muldoon.[9] They have a daughter, Halo Violetta Zappa, born in 2010.