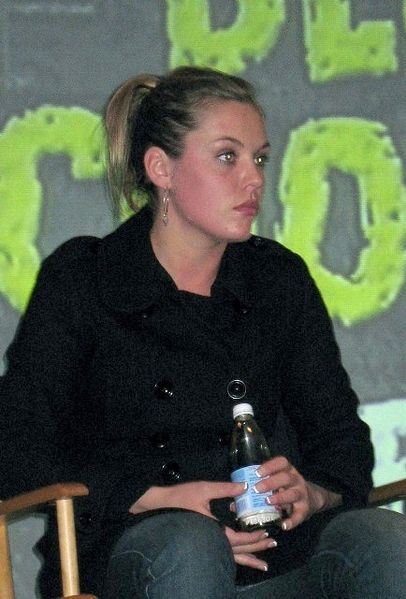 Agnes Bruckner (born August 16, 1985) is an American actress and former model. She began acting on television in the late 1990s and has since appeared in several films, including The Woods, Blue Car,[1] Murder by Numbers, Blood and Chocolate, and The Anna Nicole Story.

Bruckner was born in Hollywood, California, to a Hungarian father and a Russian mother who have since divorced; her paternal grandfather was German.[2] Her parents met in Hungary and immigrated to the U.S. in 1984 through a refugee camp in Italy.[2] She has two sisters and a brother.

Bruckner speaks some Russian and is fluent in Hungarian, having grown up speaking the language.[2] She has been involved in dance, ballet, and tap since the age of five and initially wanted to pursue a career as a dancer. At the age of eight, Bruckner worked as a child model at the suggestion of her mother and also appeared in a beauty pageant.[2] Bruckner grew up in the Los Feliz section of Los Angeles, California, until age five and then lived in Portland, Oregon, until age ten.[3] She returned with her family to Los Angeles to pursue an acting career, moving to Burbank, California.[4]

Bruckner began her career at age 11.[5] She appeared in commercials, in a few television pilots, and on the daytime soap opera The Bold and the Beautiful in 1999. At the age of 15, Bruckner got her first lead role in the independent film Blue Car (2002), in which she played a high school student involved in an affair with her teacher, played by David Strathairn. Film critic Roger Ebert wrote that Bruckner "negotiates this difficult script with complete conviction."[6] Bruckner received an Independent Spirit Award nomination for "Best Female Lead" for the role.

In the 2000s, other minor roles in television and film followed, including roles in the thrillers The Glass House (2001) and the Sandra Bullock-starring Murder by Numbers (2002). Bruckner has appeared in episodes of the television series 24 and Alias. She starred in the horror films Venom (2005) and The Woods (2006). Also in 2006, she appeared in the drama Peaceful Warrior opposite Scott Mechlowicz and received a ShoWest Female Star of Tomorrow Award and played the lead role in Dreamland.

On October 3, 2012, Bruckner was cast to play Anna Nicole Smith in a Lifetime original movie The Anna Nicole Story.[8]

Report a problem
Write to Agnes Bruckner at FanPal • 2022