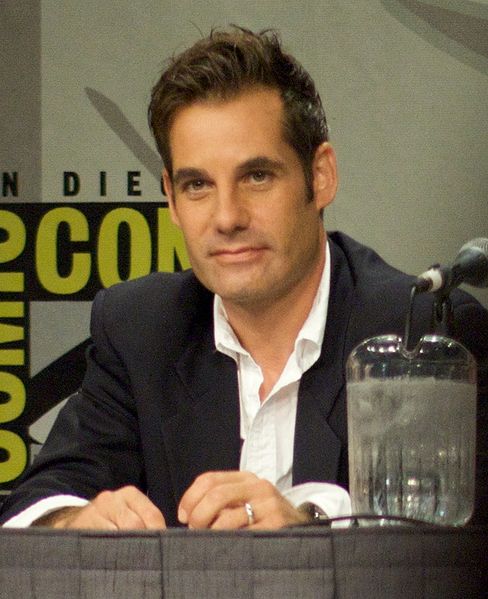 Adrian Pasdar (born April 30, 1965)[1][2] is an American actor and voice artist. He is known for playing Jim Profit on the TV series Profit, for his roles in Near Dark, Carlito's Way, Mysterious Ways and as Nathan Petrelli on Heroes. Additionally, he directed the feature film Cement. Pasdar is the voice of Iron Man in Marvel Anime, as well as in the animated series, Ultimate Spider-Man and Avengers Assemble(seasons 1-3).[3] He also played Alec Rybak, district attorney on The Lying Game and had a recurring role as Glenn Talbot / Graviton on Agents of S.H.I.E.L.D..

Pasdar was born in Pittsfield, Massachusetts.[1] His father, Homayoon Pasdar, was an Iranian American immigrant and cardiac surgeon, with a practice near Philadelphia. His mother, Rosemarie (née Sbresny),[4] worked as a travel agent.[2]

He has a sister, Anamarie Pasdar, a theatrical artistic director and producer.[2]

Pasdar turned his attention to campus stage productions and rediscovered an early interest in writing and acting. No longer able to play football, he dropped out of school and returned home, taking a job with a theater group, People's Light and Theatre Company. There he worked on sound and lighting as part of the stage crew responsible for set construction. He had a painful accident on the set, cutting off the end of his left thumb. His resulting medical compensation paid for attendance at the Lee Strasberg Theater Institute in New York City.

Pasdar was also selected to play a bit part as a police officer in the Dixie Chicks video for their song, "Goodbye Earl". The music video won both the Academy of Country Music and the Country Music Association's Video of the Year Awards in 2000.

At the age of 19, he auditioned for a role in Top Gun. Director Tony Scott was so impressed that he wrote the part of "Chipper" just for him. This led to bigger roles in Solarbabies (1986), Streets of Gold (1986), and Kathryn Bigelow's cult vampire movie Near Dark (1987), with Pasdar in the lead role of Caleb Colton. Other major roles include Vital Signs (1990). Pasdar got his biggest break in movies, when he starred as a beautiful woman opposite Julie Walters in the British movie Just Like a Woman. In 1992, he left Hollywood and returned to New York, working as a cashier for room and board, while taking the occasional small part, such as Frankie in Brian De Palma's Carlito's Way (1993).

Adrian Pasdar wrote and directed the short film Beyond Belief and directed his first feature film, the art-house neo-noir Cement, a contemporary re-telling of Othello, in 1999. The $1.7 million independent feature, which won Best Picture awards on the festival circuit, starred Chris Penn, Jeffrey Wright, Sherilyn Fenn, Henry Czerny and was written by Farscape's screenwriter Justin Monjo. "I've used every ounce of energy and every drop of money I had to make Cement," Pasdar said.[5]

Pasdar's major break into television came in 1996, when he was cast as the title character on the Fox series Profit. He also guest starred in the 2 hour season finale of the fourth season of Touched by an Angel, "The Spirit of Liberty Moon". From 2000 to 2002, Pasdar played the lead role of Anthropology Professor Declan Dunn in the spooky cult drama series Mysterious Ways on PAX.

Pasdar played David McClaren in the final two seasons of the CBS drama Judging Amy, from 2003 through 2005. In 2006, he had a high-profile guest role as Gabrielle Solis's sleazy lawyer in Desperate Housewives.

He starred as Nathan Petrelli in the NBC superhero drama Heroes. Pasdar based his mysterious character on "the most morally liquid characters" that he's encountered in his life. The character is not based on one particular political figure, but on a melange of different ones, both good and bad.[6] Pasdar's character was killed off in an episode that aired November 30, 2009.[7]

Pasdar voices Hawkeye in the animated series The Super Hero Squad Show and voiced Captain America in the Black Panther animated series. Having also voiced Iron Man in the English dub of the Iron Man anime series, Pasdar reprised the role in Marvel's Avengers Assemble (seasons 1-3), Ultimate Spider-Man, and Hulk and the Agents of S.M.A.S.H..[8]

Pasdar also played a role on The Lying Game as Alec Rybak, a corrupt district attorney. From 2014 to 2018, he played the recurring role of Glenn Talbot on the Marvel TV series Agents of S.H.I.E.L.D and, from 2016 to 2017, recurred as Nolan Burgess on the series Colony. He also starred in the pilot of the Amazon Studios series The After.[9] He also portrays the DC Comics character Morgan Edge in season 3 of The CW's Supergirl.[10]

Pasdar is a guitarist for charity rock band Band from TV. Part of the proceeds from the band's concerts go to his nominated charity, the Rush Epilepsy Center.[15]

In 2010, Pasdar narrated an audiobook edition of the cult novel Queer Fish in God's Waiting Room by the British writer Lee Henshaw. It was released in early 2011.[24]

Report a problem
Write to Adrian Pasdar at FanPal • 2021