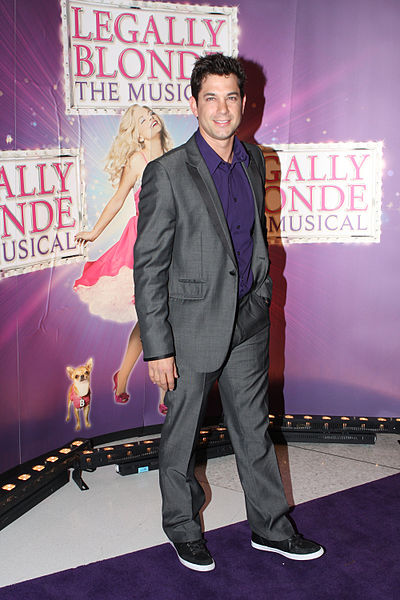 Garcia was born in Wahroonga, New South Wales. Garcia left university to take the role of Slide in the production of the musical Hot Shoe Shuffle, which toured Australia for two years before transferring to London, England. He remained in London to act in West End musicals.[citation needed]

His second feature-film performance was a major role in the 2000 film Coyote Ugly. Later in 2000, he played the role of Sean in Bootmen. In 2003, he voiced the title character in the film Kangaroo Jack. In 2004, he also played alongside Lindsay Lohan and Megan Fox in Confessions of a Teenage Drama Queen, as the character Stu Wolff, a drunk rock star, who is part of the band Sidarther and is, in Lola's words, "a greater poet than Shakespeare".[citation needed]

In 2006-07, he starred as Fiyero in the original London production of Wicked alongside Idina Menzel (later replaced by Kerry Ellis) and Helen Dallimore. He previously played the role during the show's early Broadway workshops in 2000. In late 2008, Garcia appeared in two ITV dramas, Britannia High in which he plays the dance teacher, and Mr Eleven, a two-part comedy/drama alongside Michelle Ryan and Sean Maguire. In January 2010, Garcia appeared with Ashley Banjo and Kimberly Wyatt as a judge on the reality show Got To Dance.[1]

In 2011, Garcia was cast in The Hen Do.[2] In 2012, Garcia appeared in Cole Porter's Kiss Me, Kate at the Chichester Festival Theatre, directed by Trevor Nunn and choreographed by Stephen Meare. Garcia became the fourth judge on the 2013 Australian version of Dancing with the Stars.

In 2018 Garcia was casted in Dance Boss an Australian reality television dance competition on the Seven Network presented by Dannii Minogue. Garcia will be a judge alongside singer and dancer Timomatic and actress and performer Sharni Vinson.

Report a problem
Write to Adam Garcia at FanPal • 2021