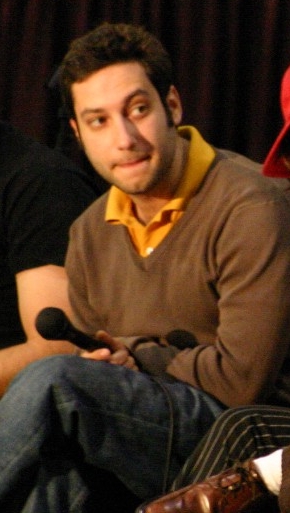 Adam Richard Busch (born July 6, 1978) is an American actor, film director and singer best known starring as Warren Mears on the television series Buffy the Vampire Slayer.[1] He also starred as Neal in the TBS comedy Men at Work. He appears in the webshow MyMusic on YouTube as Indie.

Busch was born in East Meadow, New York.[2] His first film role came in the movie Léon: The Professional.[3] Early roles include Noah Allen from Nickelodeon's the Mystery Files of Shelby Woo, and an episode of Law & Order. He also had a small part as a nerdy AV geek in the bank-robbing cheerleader movie Sugar & Spice.

Busch appeared on Fox Network's brief series The Jury in Summer 2004,[1] which ran for ten episodes, and has been seen in a character role on House. Most recently, he portrayed the Orthodox Jewish rap artist, Sholom Glickstein, in the Paul Weitz film, "American Dreamz". He had a recurring role in the Kelsey Grammer situation comedy, Back to You. He made a guest appearance on Terminator: The Sarah Connor Chronicles. He also had a guest spot on Are You Scared 2. He is also the singer in indie rock band Common Rotation. His dream role would be to portray former pop star Huey Lewis in a biopic. He also played Neal in the TBS show Men at Work.

In March 2009, Busch was dating Buffy co-star Amber Benson, who played Tara Maclay. The two have since broken up but they have remained close friends.[4]

Report a problem
Write to Adam Busch at FanPal • 2021