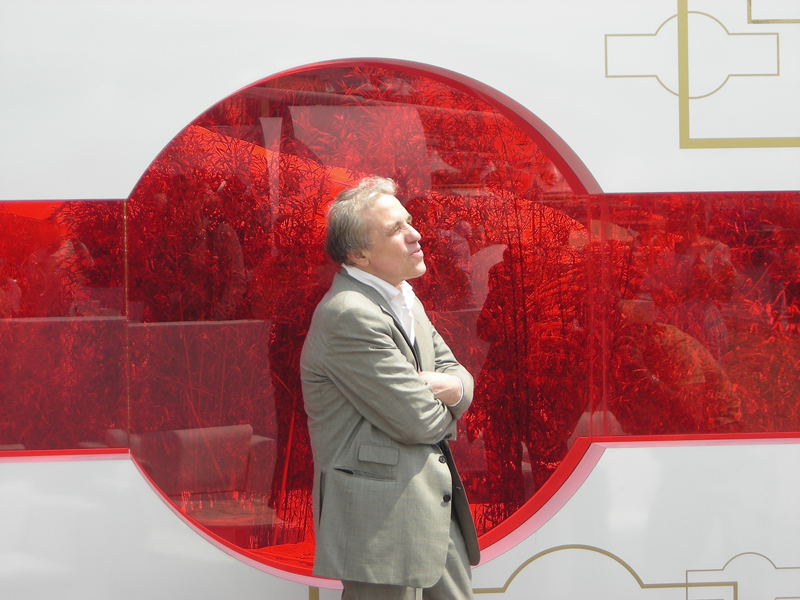 Abel Ferrara (born July 19, 1951)[1] is an American filmmaker, known for the provocative and often controversial content in his films, his use of neo-noir imagery and gritty urban settings. A long-time independent filmmaker, some of his best known films include Ms .45 (1981), King of New York (1990), Bad Lieutenant (1992) and The Funeral (1996).

Ferrara was born in the Bronx of Italian and Irish descent.[2] He was raised Catholic, which had a later effect on much of his work.[3] At 15 he moved to Peekskill in Westchester, New York. He attended the film conservatory at SUNY Purchase, where he directed several short films, most of which are all available on The Short Films of Abel Ferrara collection. Soon finding himself out of work, he directed a pornographic film titled 9 Lives of a Wet Pussy in 1976,[4] which starred his then-girlfriend. Interviewed by The Guardian in 2010, he recalled having to step in front of the camera for one scene to perform in a hardcore sex scene: "It's bad enough paying a guy $200 to fuck your girlfriend, then he can't get it up."[5]
Read more...

Ferrara first drew a cult audience with his grindhouse movie The Driller Killer (1979), an urban slasher in the mold of Taxi Driver (1976), about an artist (played by Ferrara himself under the alias Jimmy Laine) who goes on a killing spree with a drill in hand. He followed it with Ms. 45 (1981), a "rape revenge" film starring Zoë Tamerlis, who later scripted Bad Lieutenant. Ferrara was next hired to direct Fear City (1984), starring Tom Berenger, Melanie Griffith, Billy Dee Williams, Rae Dawn Chong and María Conchita Alonso. True to form, it depicted a seedy Times Square strip club, where a "kung fu slasher" stalks and murders the girls after work. Berenger portrayed a disgraced boxer who has to use his fighting skills to defeat the killer.

Following his television work, Ferrara directed several feature films: China Girl (1987), a modern retelling of West Side Story as a gang war between the Chinese tong and the Italian Mafia; the made-for-television vigilante action thriller The Gladiator (1987) with Nancy Allen; and Cat Chaser (1989), starring Peter Weller.

Next, Ferrara created one of his most well-known films, King of New York (1990), starring Christopher Walken as gangster Frank White, who runs a group of black drug dealers, including one played by Laurence Fishburne. The cast included Wesley Snipes and David Caruso. As with most of Ferrara's films, the screenplay was written by Nicholas St. John.

Ferrara next directed Harvey Keitel in an acclaimed performance as the titular Bad Lieutenant (1992). Keitel plays a foul-mouthed, sex-addicted drug-using cop who wrestles with guilt and eventually seeks redemption in a Catholic church. The script was co-written by Ms .45 star Zoë Tamerlis. Both Ferrara and Keitel were nominated for Spirit Awards and, despite its controversial content, the film was lauded by critics. Director Martin Scorsese also named it one of his top 10 films of the 1990s.[6]

Ferrara was then hired for two Hollywood studio films: a second remake of Invasion of the Body Snatchers, titled Body Snatchers (1993), for Warner Bros.; and Dangerous Game (1993), starring Keitel and Madonna, for MGM.

In the mid-1990s Ferrara returned to independent filmmaking, directing two well-received movies: The Addiction (1995)[7] and The Funeral (1996).[8] The Addiction, photographed in black-and-white, starred Lili Taylor as a New York University philosophy student who succumbs to a vampire as she studies the problem of evil and philosophical pedagogy, represented by the most violent events of the 20th century. The film also features Christopher Walken, Annabella Sciorra, Edie Falco, Paul Calderon, Kathryn Erbe and Michael Imperioli. It was also co-produced by Russell Simmons. The Funeral starred Christopher Walken, Chris Penn, Isabella Rossellini, Benicio del Toro, Vincent Gallo and others.

In 1996 he directed a music video for French singer Mylène Farmer's song "California".

Almost all of his films have been box office flops with only three recouping the investment.

After making The Blackout (1997) with Matthew Modine and Dennis Hopper, he contributed to the omnibus HBO–television movie Subway Stories. Ferrara then made New Rose Hotel (1998), which reunited him with Christopher Walken.

Ferrara returned three years later with 'R Xmas (2001), which starred Drea de Matteo and Ice-T. After recording two commentaries for Driller Killer and King of New York, he made Mary (2005), the religious-themed film starring Forest Whitaker, Marion Cotillard, Juliette Binoche, Heather Graham, Stefania Rocca and Matthew Modine. The multi-plot film concerns an actress (Binoche) who stars in a Passion of the Christ-like movie about Jesus, where she plays Mary Magdalene, with whom she subsequently becomes obsessed. Matthew Modine portrays the director of the film, who bears striking similarities to Mel Gibson. Mary premiered at the Venice Film Festival in 2005. It swept the awards ceremony, garnering the Grand Jury Prize, SIGNIS Award and two others. It was also seen at the Toronto International Film Festival.[9] In 2007, he directed a comedy with Modine, Bob Hoskins and Willem Dafoe, Go Go Tales. It premiered at the Cannes Film Festival and was either highly acclaimed or vehemently disliked. Ferrara began preparations for Jekyll and Hyde in 2009, which was to star Forest Whitaker and 50 Cent. After disagreements with Warner Bros. the film was indefinitely shelved in 2010.

A Ferrara film, the docudrama called Napoli Napoli Napoli, is scheduled to premiere at the Rome Film Festival. Ferrara plays a small role as a mugger in the independent film Daddy Longlegs (2010). Also in 2010, Ferrara teamed up with Film Annex, an online film distribution platform and Web Television Network, to launch www.abelferrara.com. In a press release about the new web channel, Ferrara said, "We have been looking for a place, a home to express what we are doing and to avoid the misinformation found when we are not active on a website. With Francesco Rulli, the Founder of Film Annex, we hope to create a distribution platform for the work, both past and present, while actively interacting with our audience, collaborators and other filmmakers."[10]

In April 2011, Ferrara began shooting his first feature in four years, 4:44 Last Day on Earth, starring Willem Dafoe and Ferrara's longtime companion Shanyn Leigh. This is Dafoe's third collaboration with Ferrara after 1998's New Rose Hotel and his last feature film, 2007's Go Go Tales. The film was shot in one location, an apartment, set during the course of the last 24 hours before the biblical apocalypse. Ferrara's longtime cinematographer Ken Kelsch shot the film. 4:44 - Last Day on Earth competed at the 68th Venice International Film Festival in September 2011 and released in theatres in March 2012.[11] In April 2013, Ferrara began shooting a fictionalized version of the Dominique Strauss-Kahn sexual assault case titled Welcome to New York. It stars Gérard Depardieu in the role of Dominique Strauss-Kahn and Jacqueline Bisset as Anne Sinclair.[12] It was released on May 17, 2014 on VOD because the film failed to be picked up for theatrical distribution.[13]

2014 saw the release of Pasolini about the acclaimed Italian director, poet, journalist and intellectual who was murdered in 1975. The film stars Willem Dafoe in the title role.[14]

It has been confirmed that Ferrara and Dafoe will collaborate for a fifth time in a film inspired by Carl Jung's The Red Book. The script has been written by Ferrara and Chris Zois and will be titled Siberia.[15][16] Isabelle Huppert and Nicolas Cage will co-star with Dafoe.[17]

Ferrara is married to Christina and they have a daughter.[18] He was previously married to Nancy Ferrara.[19] Ferrara also has two adopted children: Endira and Lucy.[20][21] He was also in a relationship with actress Shanyn Leigh.[22][23]

Ferrara lives in Rome, Italy.[24] He moved there following the 9/11 attacks because it was easier for him to find financing for his films in Europe.[25]

Ferrara has admitted that Pier Paolo Pasolini has served as influence in becoming a filmmaker.[27] He also credited Stanley Kubrick and Woody Allen as influences,[28] as well as Rainer Werner Fassbinder.[29]

Ferrara has recast many of the same actors in his films, most notably Christopher Walken, Harvey Keitel and Willem Dafoe.[33] Other actors he has recast include Annabella Sciorra and Matthew Modine as well as character actors such as Victor Argo, Paul Calderón and Giancarlo Esposito.[34] David Caruso is another one of Ferrara's frequent film collaborators.[35] M .45 (1981) star Zoë Lund collaborated with Ferrara again on Bad Lieutenant (1992), which she co-wrote.[36] Gretchen Mol has worked with Ferrara twice.[37] Forest Whitaker starred in Ferrara's films Mary (2005) and Body Snatchers (1993).[38]